HOME
RA, Redefined
Resources
Expert Profiles
Contact Us
RA, REDEFINED
Do Autoantibodies Drive Disease in Seropositive RA?
RA is an autoimmune disease driven by self-perpetuating central pathways, involving B cell–derived autoantibodies and proinflammatory cytokines.1 Disease progression is driven by a range of immune cells that includes T cells, B cells, and macrophages.1
Evolving perspectives on the disease drivers in RA
The modern age of clinical immunology began with the discovery that patients with RA produce antibodies that react with antigens made by their own bodies (i.e., autoantibodies).2 In RA, the first type of disease-associated autoantibody to be discovered was rheumatoid factor (RF), which contributes to the formation of immune complexes and the activation of the complement cascade that promotes inflammation, progressive bone erosions, and joint destruction.3 For years the debate raged as to whether autoantibodies were merely signs (i.e., biomarkers) of a chronic disease, or whether they were truly drivers of the disease.4 In later years, an autoantibody more specific to RA, the anti-citrullinated protein antibody (ACPA), was discovered.2,3 Thus, a more complete understanding of RA pathogenesis and the role of autoantibodies would require a better understanding of the cellular and molecular regulators of immune responses (Figure 1).3 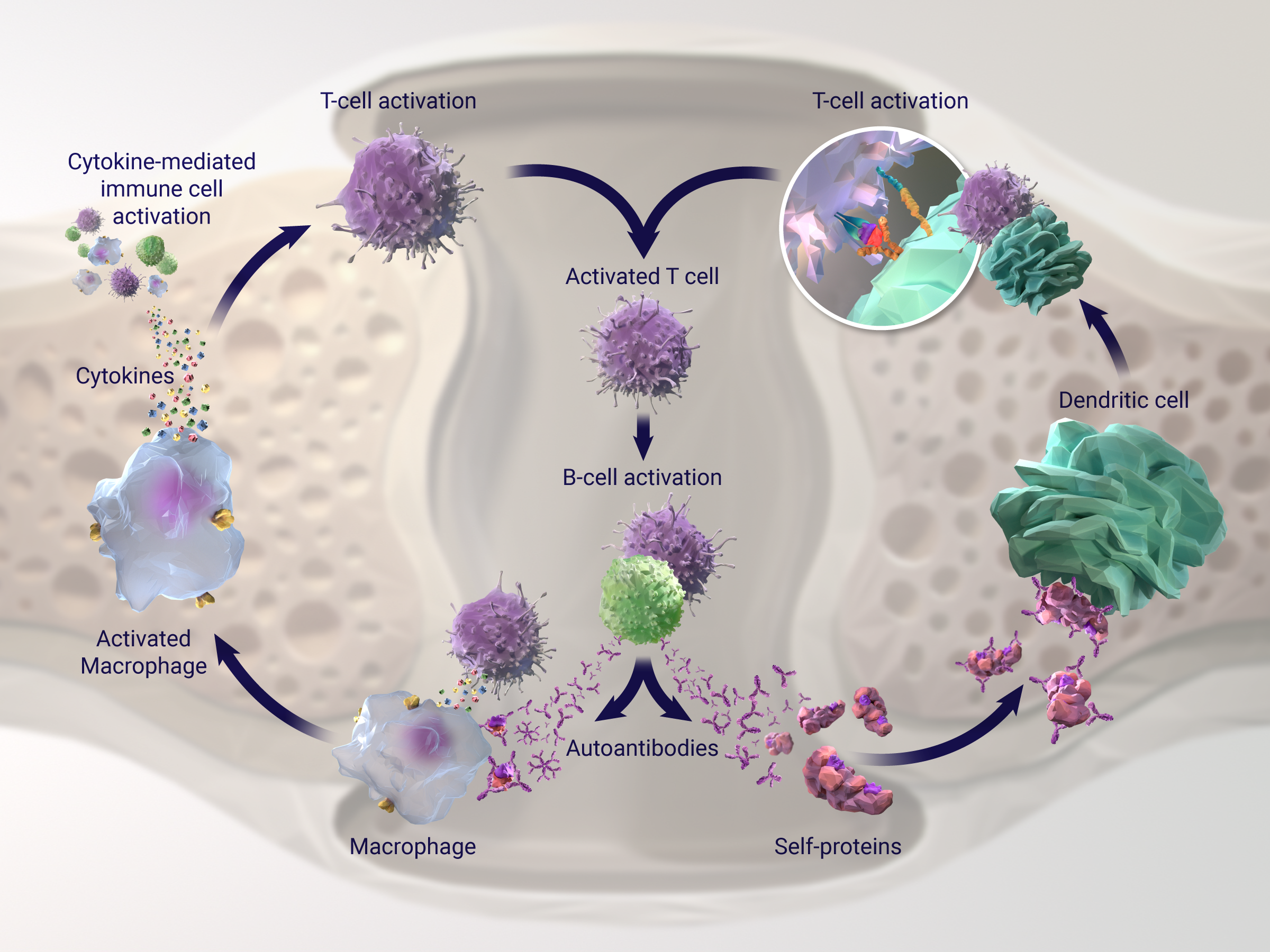 In healthy individuals, an immune response is initiated when an antigen-presenting cell (APC) presents a foreign antigen to a T cell. A second co-stimulatory signal is required for full T-cell activation. Without co-stimulation, T cells are not activated and become unresponsive, or anergic. Thus, co-stimulation plays a vital role in initiating a T cell–mediated immune response against foreign pathogens. Cytokines, acting as a "third" signal, drive T-cell differentiation into diverse helper (CD4+) T-cell subsets with different functions. One such subset, the T follicular helper cells (Tfh), can migrate to the B-cell follicle and activate B cells in response to antigen exposure in a lymph node or other lymphoid tissues. These B cells further differentiate into memory and plasma cells in the germinal center, allowing for long-term response and secretion of antibodies directed against the specific foreign antigen.5

During an autoimmune disease, the proteins made in our own bodies can be processed into autoantigens for responses that are otherwise forbidden in healthy individuals. Healthy immune systems protect against recognition of autoantigens by employing multiple mechanisms, such as the active removal of self-reactive T and B cells, through a process known as immune tolerance.5 However, in a genetically susceptible individual, a simple chemical modification of a self-protein can create a new autoantigen that can trigger an autoimmune response.1

In RA, there are several genetic, epigenetic, and environmental factors believed to contribute to disease onset.1 Together, these factors can lead to self-protein citrullination, which is a change in the chemical nature of arginine amino acids in self-proteins, resulting in the loss of immune tolerance, recognition of these autoantigens, and ultimately clinical onset of disease.1,3 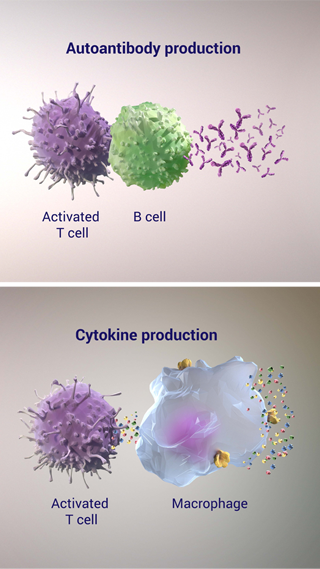 When immune tolerance is breached in RA, autoantigens are presented to T cells by APCs. The resulting antigen recognition and co-stimulation leads to the activation of a self-reactive T cell.1 Unlike in healthy individuals, in RA, T cell–mediated B-cell activation commonly induces mature B cells to produce autoantibodies, as shown in Figure 2.1 As mentioned above, two well-studied pathogenic autoantibodies in RA are ACPA and RF.2 While RF can be detected in 60%-80% of RA patients, it is not specific to RA.2 ACPAs, however, have disease specificity up to 95% and are found in 70%-90% of RA patients.2 Both ACPAs and RF may be produced and detected in the blood of patients prior to the clinical onset of disease, though the presence of ACPAs is strongly correlated with more severe symptoms before and after clinical onset.1-3 ACPA-positive RA patients experience worse overall outcomes, more severe radiographic progression, and additional comorbidities.3,7 Thus, pathogenic biomarkers such as ACPA may be important diagnostically and prognostically for guiding treatment decisions.4

In RA, like in many autoimmune diseases, autoantigen exposure results in Tfh cell–mediated B-cell co-stimulation and activation, resulting in the production of specific types of autoantibodies, shown centrally in Figure 1.3,5 Once formed, autoantibodies then become effector molecules that drive disease pathology.3 As shown in the pathway on the right, these autoantibodies recognize and bind to the continually produced supply of self-proteins from injured and dying host cells.5 Digestion and presentation of autoantigens by APCs, which include memory B cells, also help to renew the activated, self-reactive T-cell population.1,5,8

In RA, autoantibodies along with other drivers mediate inflammation and cytokine release (Figures 1 and 2).1,7 As seen on the left side of Figure 1 above, the release of T cell–derived cytokines can lead to macrophage activation.6 Another powerful effector is the immune complex: aggregates arising from multiple autoantibodies and autoantigens binding together.3 ACPA- and RF-containing immune complexes are powerful pathogenic effectors that amplify the inflammatory response of macrophages.7,8 Macrophage activation in the rheumatoid joint leads to further secretion of proinflammatory cytokines, including IL-1, IL-6, IL-8, and TNF-α, which all coordinate to drive further T-cell activation.1,5

B cell–derived autoantibodies and proinflammatory cytokines play pivotal roles in the development and progression of RA.1 Such autoimmunity is dependent on a constant T cell–initiated immune response.1 As shown, the constant co-stimulation required for T-cell activation comes from a variety of sources, such as B cells, dendritic cells, and macrophages, through feedback loops that are crucial for disease perpetuation.5,8 As RA disease progresses, permanent structural damage and functional impairment can occur. Such outcomes include irreversible bone erosion, cartilage degradation, synovitis, pain, and other joint-related abnormalities.1,3 Ongoing research has shed light on the vital role of pathogenic biomarkers, such as ACPA, as powerful effectors of disease.3 Such research continues to increase our understanding of RA pathophysiology.1,3,7

This monograph was sponsored by Bristol-Myers Squibb.